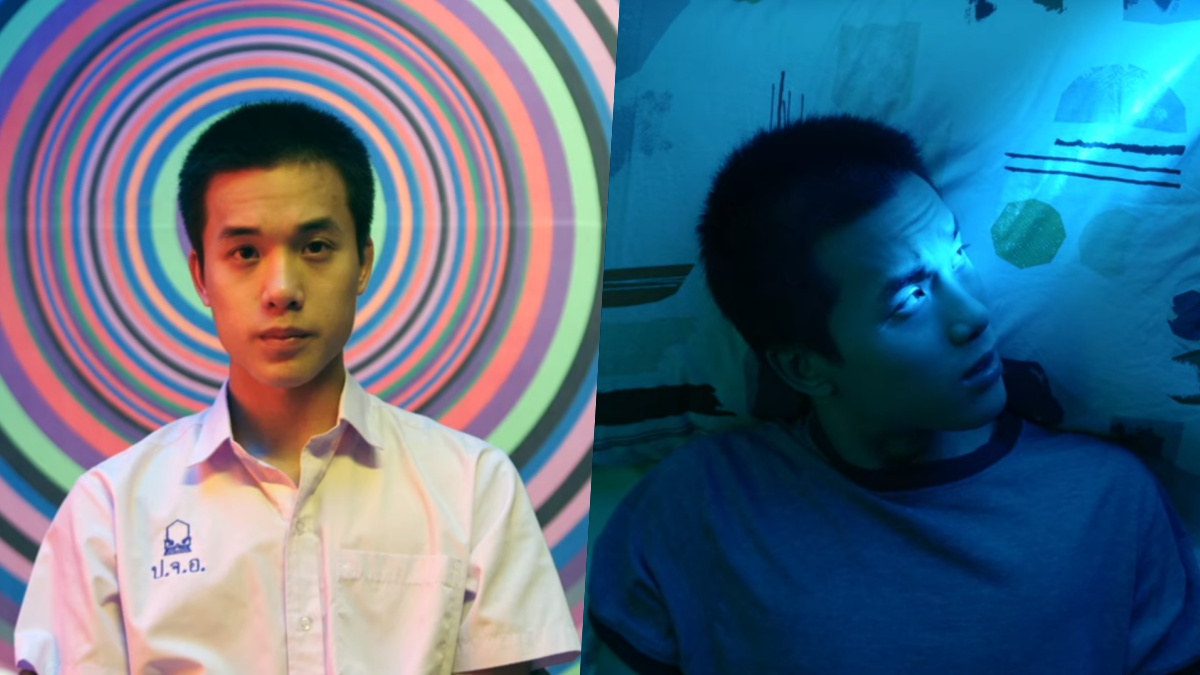 Project S: Skate Our Souls (hereby known in this post as S.O.S.) is a 2017 Thai drama which presents a poignant story of one teenager’s struggle with mental health and the stigma attached to it.

S.O.S. is a solid drama overall. The acting is top-notch, the story is bold, and the cinematography is captivating. This last point struck a chord with me while watching because of the unique, very purposeful way colors are used throughout the drama. So, this is what we’ll be taking a look at today — specifically, how the creators of S.O.S. use color to visually present the protagonist’s inner thoughts and feelings.

Before getting into the color aspect of it all, I want to quickly mention two other methods of filming I found fascinating: the wide-angle lens and the underwater effect. Though used only a handful of times, the two very intentional choices — though unconventional — aid in translating Boo’s feelings of overwhelm and hopelessness to viewers. It’s ingenious and effective, lending even more relatability to his struggles.

All right, let’s talk about color usage! Boo (played brilliantly by James Teeradon Supapunpinyo) is a depressed high-school boy who finds joy in skateboarding, though his father (Tom Phollawat Manuprasert) forbids him from it. Our very average protagonist can often be found in either his school uniform (which of course blends in rather than stands out) or in a plain T-shirt and shorts. His natural hair is a short, slightly grown-out buzzcut. Nothing about him stands out color-wise. Things around him do, however.

Everything in his home, for instance, is a sickly shade of green or blue, and sometimes yellow-orange.

A home should be a place of comfort and safety, but the cold color palette of Boo’s home is a visual juxtaposition of those qualities. They embody what Boo actually seems to feel at home — anxiety, sickness, discomfort, depression. (Remember, I’m speculating.)

The only notable exception to the general color scheme of his home is the painting behind the kitchen table, where Boo often sits.

This chaotic vortex of color is only visible behind Boo when he is sitting at the table, which is where he and his father have nearly all of their interactions early on in the drama. And what topic do they discuss at the kitchen table? Boo’s grades — a significant source for his feelings of insecurity and failure. He himself states later on that he feels he will never be able to achieve the academic bar his dad has set for him. All of the colors likely represent his feelings of overwhelm, confusion, chaos, and perhaps some anger and resentment deep down. Again, this is my interpretation.

The only scene where that painting is shown in any other setting besides behind Boo is at the very end, when he and his father are shown facing the chaotic mass of colors together, Dad’s arm around Boo’s shoulders as he helps him with homework. His father has learned to accept Boo for who he is and does his best to further understand and support him. The painting is no longer a backdrop for Boo to sit and listen as his father talks to him; now it is in front of both of them as they face it (struggles, Boo’s depression, whatever “it” is) together. I’d include a picture, but that’s harder to hide spoiler-wise, so check out the cool moment at the end of the very last episode (episode 8).

Bell (Pat Chayanit Chansangavej) is a therapist intern who takes Boo under her wing. She, like Boo himself, keeps her hair its natural color and is always in muted, plain-colored clothes. The significance of her physical appearance in regards to hair and clothes could be in that she’s the only person Boo feels like is on “his side”; he might see her as an ally, especially because she understands depression while the others in Boo’s life don’t. She is always on Boo’s team and ends up sacrificing a lot to help him in the way she believes is best. (I’m sure not everyone would agree that what she does is the correct way to go about things, but this post isn’t a comment on that.)

In contrast with Bell and Boo are Simon (Toni Rakkaen) and Fern (Praew Narupornkamol Chaisang), the brother-sister duo who bring Boo into their group of skater friends and introduce him to the world and culture of skateboarding. Both wear loud, bright clothes and sport bold, neon hair colors.

Through Boo’s eyes, the two embody everything he desperately wants in life. They’re free to skateboard; he’s not allowed to. They’re happy-go-lucky and carefree; he suffers from depression. They come from a loving, warm, and understanding family; he doesn’t seem to feel loved at home (at least, not for the majority of the drama). The contrast in their physical appearances with his is a visual way of setting Simon and Fern apart from Boo, who very likely feels they’re from a different world than he is.

A key moment that backs up this interpretation is when Boo dresses up as Simon to make the big jump. I won’t go into more details for the sake of less spoilers, but it’s an iconic moment in the drama — and the symbolism in Boo donning Simon’s signature jacket and hat to very literally take a flying leap out of his comfort zone should not be lost on viewers.

Before concluding, I’d be remiss if I did not take a moment to pause and praise James’ performance: it’s absolutely spellbinding. He clearly knew the weight of the subject being tackled and how painfully relatable it would be to certain viewers — and his delivery does the difficult subject matter justice. He is incredibly convincing as Boo. After watching this drama (especially after having seen him as very different characters in other dramas), I’m convinced he’s one of the most talented actors currently out there.

To hear James share more about the difficulty of the role and how his struggles continued even after shooting ended, check out this interview:

If I went over every use of color symbolism, this would be an outrageously long post. So I’ll leave things here for now. I just wanted to share my perspective with you, my readers. I hope you found something new and/or interesting in this post — and if you found something you disagree with or would like to add anything, don’t hesitate to comment below and join in the conversation!

As always, thank you for reading and happy drama-watching!

Next on my watch-list: Imitation

4 thoughts on “The Color Of Depression: How This Thai Drama Uses Color To Depict A Teenager’s Struggle With Mental Health”