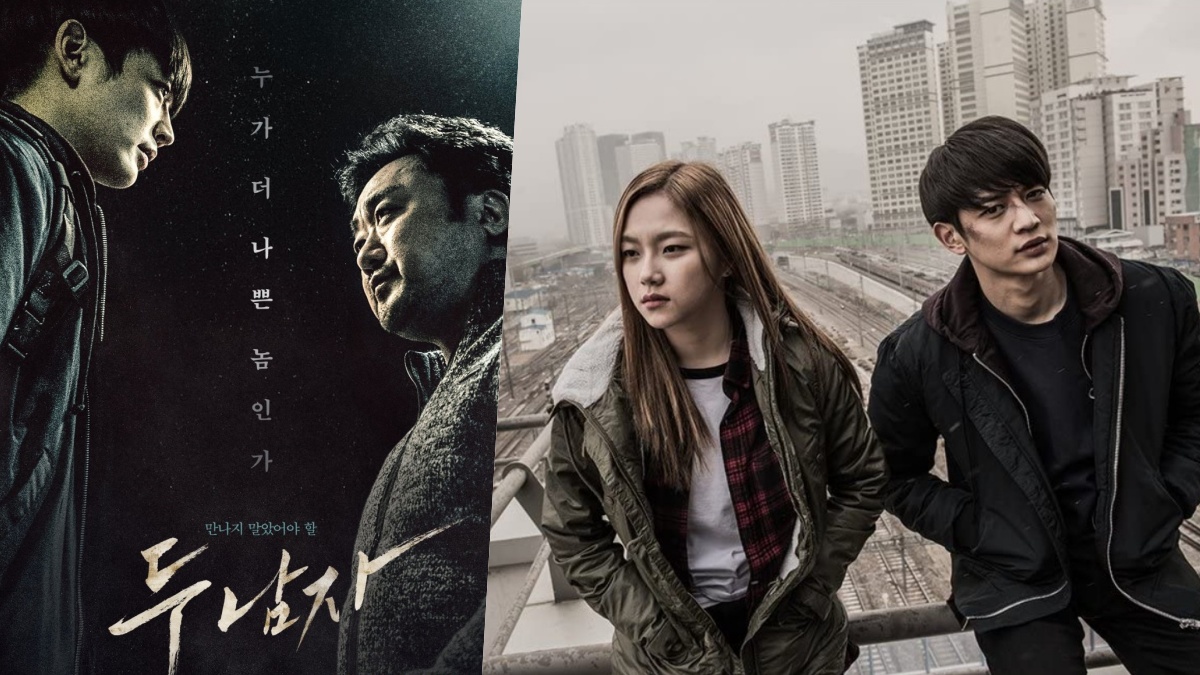 Thanks to SHINee’s recent comeback, I found myself recalling a movie starring Minho that I watched several years ago. And rather than write about a currently-airing drama like a sensible person, I’ve decided to metaphorically pen this wholesomely unasked-for review of Derailed (2016).

Let’s start with some things I love about the film:

The story is unique and intriguing from start to finish.

The movie’s concept is refreshingly unique; I can’t say I’ve seen any other film with this exact story structure. Minho stars as Jin Il, a young runaway who lives on the streets with Ga Young (Jung Da Eun) and two other close friends. One day, the kids decide to pull a love motel scheme: Ga Young will agree to meet with a man in a motel, but the rest of the gang will burst in and rob him before anything can happen. Their plan is foiled, however, when their first victim, Hyung Seok (Ma Dong Seok), ends up holding Ga Young hostage…and believe it or not, that’s really only the beginning of our story.

Each individual’s performance is outstanding.

Every single actor/actress in this film blew me away with their performance. Realistic, believable characters saturate a storyline that calls for powerful acting. Minho completely sheds his clean-cut idol image for the grime and bruises of his character. But anyone can have their outward appearance altered. And that’s where Minho really knocks it out of the park. The way he physically and emotionally embodies someone thrust into such desperate, frightening, and dark situations is simultaneously heartbreaking and incredible to watch. He doesn’t hold back — and deserves a lot of props for this role.

Jung Da Eun plays Ga Young, and — like Minho — completely sheds her idol image for this role. The fatigue, hunger, and terror Ga Young feels throughout the film is palpable. Jung Da Eun fully embraces the essence of Ga Young, reacting how I imagine any young girl might react under the harsh circumstances the character has been through (and continues to go through). Da Eun’s talent as an actress absolutely shines in this film. It’s a gut-wrenching performance, yet understated (which makes it all the more believable). The fact that this was her first movie role completely blows my mind.

And of course the legendary Ma Dong Seok is one of the film’s especially bright highlights. Rather than a one-dimensional plot device, the character of Hyung Suk is written with surprisingly relatable depth. He’s caught between a rock and a hard place, and the viewer gets to see why he makes the decisions he does (be they good or bad…usually bad). He’s an antagonist with development, which Ma Dong Seok executes flawlessly.

I’ll leave it at these three for now, but everyone does an outstanding job. Check out the rest of the cast to find some more familiar (and perhaps not-so-familiar) talented faces. For example, this film contains one of actor Kim Jae Young‘s earliest roles…and, ladies and gentlemen, it’s a doozy (as in, really intense).

The police are useful and actually listen to the kids.

The Useless Police is one of my biggest film trope pet peeves. It’s refreshing to see on-screen policemen who actually use their brains and do their job. Imagine that. No, the police do not magically show up at the end of the day to save everyone (unfortunately), but they’re also not bumbling idiots. Nor are they stubborn jerks who blindly disregard anything non-adults have to say. The police garner trust with our main protagonists because they treat the youth like human beings and listen to what they have to say. It’s a solid writing choice for the story’s progression to have at least someone the kids can rely on when they need an ally.

The movie is gritty without trying too hard to be.

The header essentially says it all. I appreciate that Derailed portrays dark and dangerous (but — tragically — very realistic) aspects of society in an honest way, without coming across as angsty or preachy.

Now for a couple things I don’t love about the film:

The violence can be a bit much.

While I don’t like gore, violence in films usually doesn’t bug me too much. But Derailed can be downright difficult to watch at times. If Hyung Suk isn’t beating up Jin Il, then he’s beating up the other antagonist — who, in turn, is either beating up someone else, or getting his goons to. Yes, it adds to the gritty realism the entire film vibes with, so I understand why the violence is there — but I believe the amount of slapping, punching, and general beating is often needlessly excessive and could have been toned down significantly without compromising the integrity of the film. A personal preference, certainly, but one I thought warranted mentioning.

Spoilers for the end of the movie ahead!

I thought killing off Jin Il was needless. These poor kids have been through such atrocities and Jin Il has already sacrificed so much for Ga Young (and vice versa, for that matter). We fully understand that he loves her and would do anything for her; that point did not need to be driven home any more. But alas, no one consulted me when writing the end of the film.

What’s your favorite Minho role? What about Jung Da Eun? I think she’s stellar in Mr. Temporary, which also happens to be one of my favorite dramas of all time. Join in the conversation by leaving a comment below.

As always, thank you for reading! Until next time.